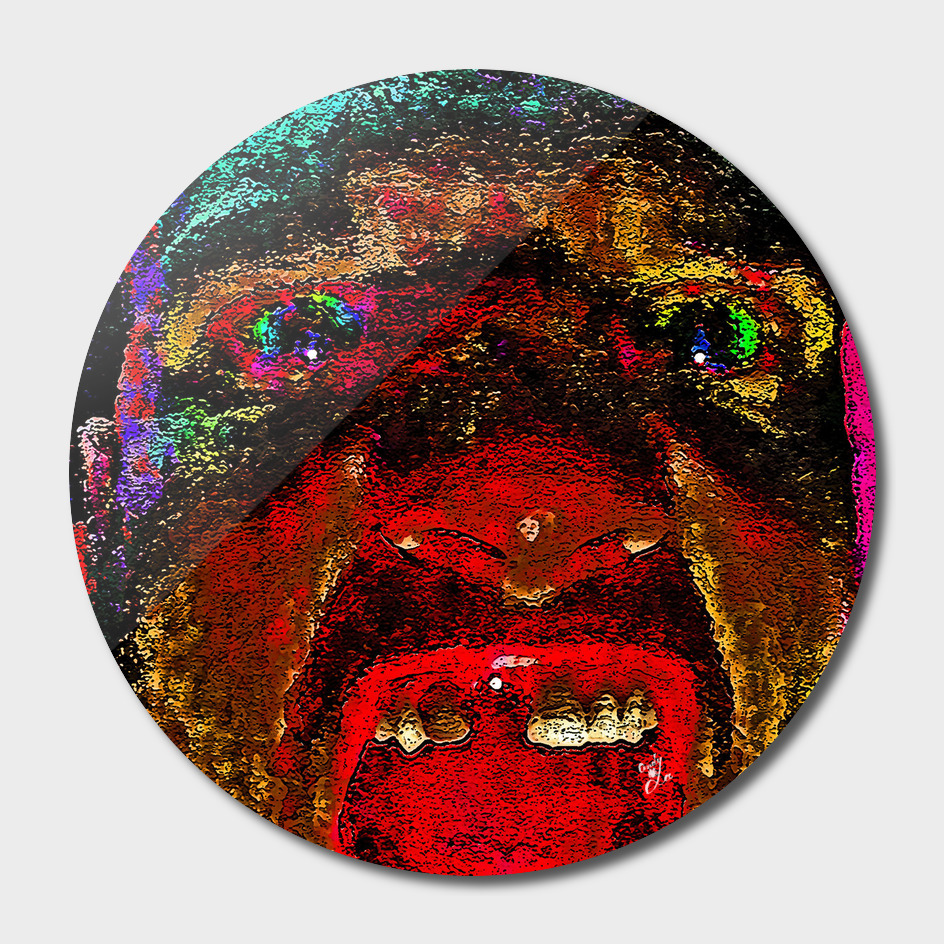 This exclusive edition Disk, designed by Andy i Za, comes with a numbered and signed certificate of authenticity. Printed on a .045” thick aluminum sheet, this print is crisp, high gloss, lightweight, and water resistant. It comes with a proprietary 1/2" aluminum shadow mount allowing for easy installation.

The Scream is the popular name given to each of four versions of a composition, created as both paintings and pastels, by the Expressionist artist Edvard Munch between 1893 and 1910. The German title Munch gave these works is Der Schrei der Natur (The Scream of Nature). The works show a figure with an agonized expression against a landscape with a tumultuous orange sky. Arthur Lubow has described The Scream as "an icon of modern art, a Mona Lisa for our time." Edvard Munch created the four versions in various media. The National Gallery, Oslo, holds one of two painted versions (1893, shown here). The Munch Museum holds the other painted version (1910, see gallery, below) and a pastel version from 1893. These three versions have not traveled for years. The fourth version (pastel, 1895) was sold for $119,922,600 at Sotheby's Impressionist and Modern Art auction on 2 May 2012 to financier Leon Black, the fourth highest nominal price paid for a painting at auction. The painting was on display in the Museum of Modern Art in New York from October 2012 to April 2013. Also in 1895, Munch created a lithograph stone of the image. Of the lithograph prints produced by Munch, several examples survive. Only approximately four dozen prints were made before the original stone was resurfaced by the printer in Munch's absence. The Scream has been the target of several high-profile art thefts. In 1994, the version in the National Gallery was stolen. It was recovered several months later. In 2004, both The Scream and Madonna were stolen from the Munch Museum, and were both recovered two years later. In the late twentieth century, The Scream was imitated, parodied, and (following its copyright expiration) outright copied, which led to it acquiring an iconic status in popular culture. It was used on the cover of some editions of Arthur Janov's book The Primal Scream. In 1983-1984, pop artist Andy Warhol made a series of silk prints copying works by Munch, including The Scream. His stated intention was to desacralize the painting by making it into a mass-reproducible object. Munch had already begun that process, however, by making a lithograph of the work for reproduction. Err 's ironic and irreverent treatment of Munch's masterpiece in his acrylic paintings The Second Scream (1967) and Ding Dong (1979) is considered a characteristic of post-modern art. The expression of Kevin McCallister (Macaulay Culkin) in the poster for the movie Home Alone was inspired by The Scream. Cartoonist Gary Larson included a "tribute" to The Scream (entitled The Whine) in his Wiener Dog Art painting and cartoon compilation, in which the central figure is replaced by a howling dachshund. The Scream has been used in advertising, in cartoons such as The Simpsons, films, and on television. The principal alien antagonists depicted in the 2011 BBC series of Doctor Who, named "The Silence", have an appearance partially based on The Scream. The Ghostface mask worn by the primary antagonists of the Scream series of horror movies is based on the painting, and was created by Brigitte Sleiertin, a Fun World employee, as a Halloween costume, prior to being discovered by Marianne Maddalena and Wes Craven for the film. In 2013, The Scream was one of four paintings that the Norwegian postal service chose for a series of stamps marking the 150th anniversary of Edvard Munch s birth. A patient resource group for trigeminal neuralgia (which has been described as the most painful condition in existence) have also adopted the image as a symbol of the condition. In "The Missing Scream of Munch", an episode of the anime Detective Conan, the disappearance of The Scream provides the main part of the plot. The painting features in chapter 12 of Philip K. Dick's novel, Do Androids Dream of Electric Sheep? The two bounty hunters, Deckard and Resch are on the trail of Luba Luft, a suspect android. The painting is described as follows: "The painting showed a hairless, oppressed creature with a head like an inverted pear, its hands clapped in horror to its ears, its mouth open in a vast soundless scream. Twisted ripples of the creature's torment, echoes of its cry, flooded out into the air surrounding it: the man or woman, whichever it was, had become contained by its own howl." In most Unicode emoji renderings, U+1F631. FACE SCREAMING IN FEAR is made to resemble the subject of the painting. US Department of Energy Scream A simplified version of the subject of the painting is one of the pictographs considered by the US Department of Energy for use as a non-language-specific symbol of danger in order to warn future human civilizations of the presence of radioactive waste. In 2016, Good Smile Company produced a figma action figure based on The Scream.