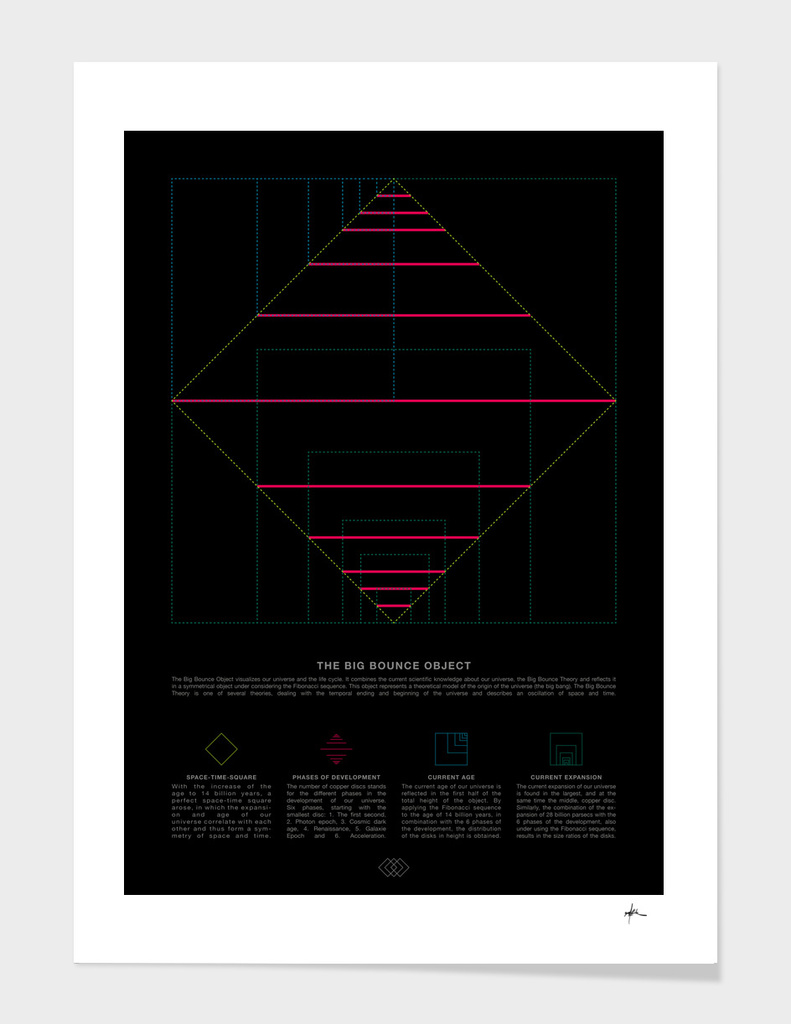 The Big Bounce Object An Infographic according to the object 28 x 28 cm - copper and stainless steel - 2016 - Timo Brunkhorst Will our universe contract like a rubber band and then again expand to reinvent itself, or will it loose itself in eternal nothingness… The Big Bounce Object visualizes our universe and the life cycle. It combines the current scientific knowledge about our universe, the Big Bounce Theory and reflects it in a symmetrical object under considering the Fibonacci sequence. Our universe: „Age 13.799 ± 0.021 billion years Diameter 91 billion light-years (28 billion parsecs) Mass […] At least 1053 kg Average density 4.5 x 10−31 g/cm3 Average temperature 2.72548 Kelvin Ordinary matter 4.9% (baryonic) Dark matter 26.8% Dark energy 68.3%“ Wikipedia (ed.) (2016). Universe. Online: https://en.wikipedia.org/wiki/Universe (Access: 05.10.2016). Big Bounce Theory This object represents a theoretical model of the origin of the universe (the big bang). The Big Bounce Theory is one of several theories, dealing with the temporal ending and beginning of the universe and describes an oscillation of space and time. (cf. Wikipedia (ed.) (2016). Big Bounce. Online: https://de.wikipedia.org/wiki/Big_Bounce (Access 05.10.2016). The object illustrates the familiar three dimensions (length, width and height) known to us, and brings out the strong interrelation between time and space as well. Fibonacci sequence „In Mathematics - the Fibonacci numbers are the numbers in the following integer sequence, called the Fibonacci sequence, and characterized by the fact that every number after the first two is the sum of the two preceding ones: 1, 1, 2, 3, 5, 8, 13, 21, 34, 55, […] [In nature] - Fibonacci sequences appear in biological settings, in two consecutive Fibonacci numbers, such as branching in trees, arrangement of leaves on a stem, the fruitlets of a pineapple, [the arrangement of sunflower seeds], […]“ Wikipedia (ed.) (2016). Fibonacci number. Online: https://en.wikipedia.org/wiki/Fibonacci_number (Access 05.10.2016). Phases of development The number of copper discs stands for the different phases in the development of our universe. Six phases, starting with the smallest disc: „1. The first second [0 - 1 seconds] […] All matter and energy of the entire visible universe is contained in an unimaginably hot, dense point […]. […] The familiar elementary particles now form as a soup of hot ionized gas called quark-gluon plasma […]. […] 2. Photon epoch [10 seconds - 70.000 years] […] the universe becomes a super-hot glowing fog. […] free electrons begin scattering light. […] 3. Cosmic dark age [370.000 years - 470-500 million years] […] First stars begin to shine. […] First large-scale astronomical objects, protogalaxies and quasars may have begun forming. […] 4. Renaissance [600 - 910 million years] […] Renaissance of the Universe—end of the Dark Ages as visible light begins dominating throughout. Possible formation of the Milky Way Galaxy. […] 5. Galaxie Epoch [1 - 7,64 billion years] […] Galaxy evolution continues as more modern looking galaxies form and develop. […] The Universe continues to organize into larger wider structures. The great walls, sheets and filaments consisting of galaxy clusters and superclusters and voids crystallize. […] [And, as a whole, in the course of time, they fit together like a neural network in our brain.] 6. Acceleration [7.8 - 13,8 billion years] […] Dark-energy dominated era begins, following the matter-dominated era in during which cosmic expansion was slowing down. […] [Following up the era of acceleration for an uncertain time.]“ Wikipedia (ed.) (2016). Timeline of the formation of the Universe. Online: https://en.wikipedia.org/wiki/Timeline_of_the_formation_of_the_Universe (Access: 05.10.2016). Construction of the object The symmetrical and quadratic structure was visually focused in the design. The basis for this is the expansion and the age of our universe in combination with the Fibonacci sequence. With the increase of the age from 13.8 to 14 billion years, a perfect space-time square arose, in which the expansion and age of our universe correlate with each other and thus form a symmetry of space and time. The current age of our universe („14 billion years“) is reflected in the first half of the total height of the object (disk > 1 The first second - 6 Acceleration). The current expansion of our universe (28 billion parsecs) is found in the largest, and at the same time the middle, copper disc. The distance and the size ratios of the disks to each other are calculated with the Fibonacci sequence, in order to bring the symmetrical structure and the scientific knowledge into the highest possible natural harmony. By applying the Fibonacci sequence to the age of 14 billion years, in combination with the 6 phases of the development, the distribution of the disks in height is obtained. Similarly, the combination of the expansion of 28 billion parsecs with the 6 phases of the development, also under using the Fibonacci sequence, results in the size ratios of the disks. According to current findings the Galaxies, clusters of galaxies and super clusters drift more and more apart with increasing speed (like dots on a balloon which is constantly inflated) until one day the ratio of darker energy to matter is changed again, or by factors not known to us yet, the expansion reversed into a contraction.