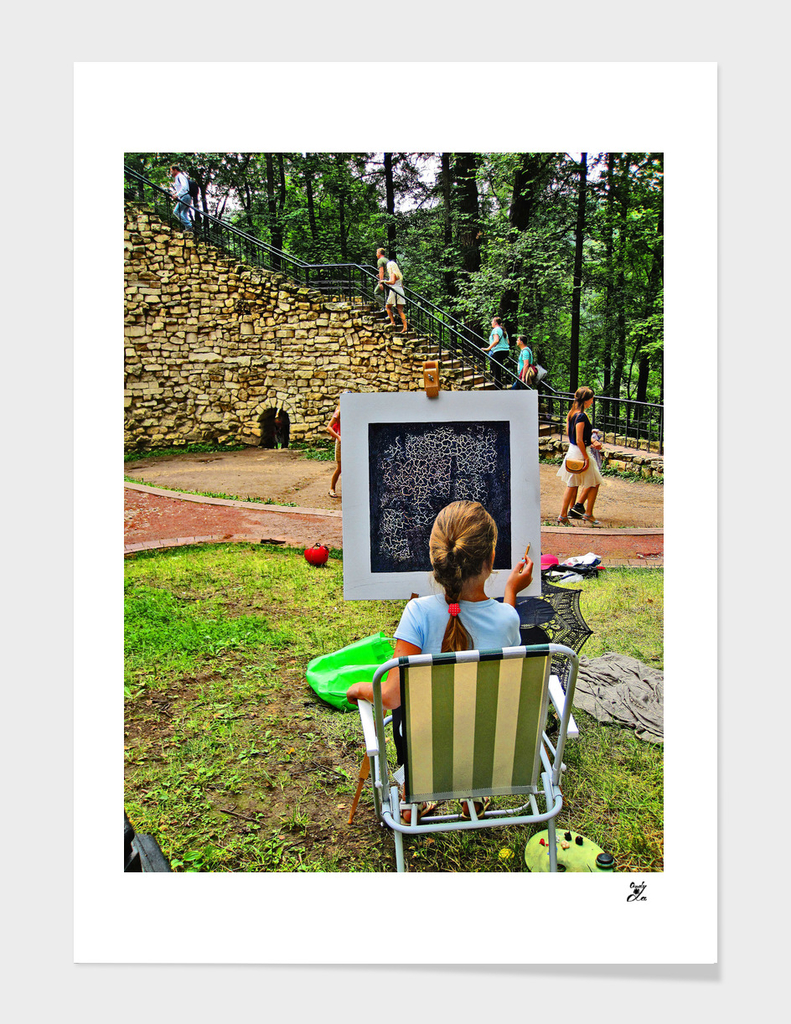 A sketch is a rapidly executed freehand drawing that is not usually intended as a finished work. A sketch may serve a number of purposes: it might record something that the artist sees, it might record or develop an idea for later use or it might be used as a quick way of graphically demonstrating an image, idea or principle. Sketches can be made in any drawing medium. The term is most often applied to graphic work executed in a dry medium such as silverpoint, graphite, pencil, charcoal or pastel. But it may also apply to drawings executed in pen and ink, ballpoint pen, water colour and oil paint. The latter two are generally referred to as "water colour sketches" and "oil sketches". A sculptor might model three-dimensional sketches in clay, plasticine or wax. Sketching is generally a prescribed part of the studies of art students. This generally includes making sketches (croquis) from a live model whose pose changes every few minutes. A "sketch" usually implies a quick and loosely drawn work, while related terms such as study, modello and "preparatory drawing" usually refer to more finished and careful works to be used as a basis for a final work, often in a different medium, but the distinction is imprecise. Underdrawing is drawing underneath the final work, which may sometimes still be visible, or can be viewed by modern scientific methods such as X-rays. Most visual artists use, to a greater or lesser degree, the sketch as a method of recording or working out ideas. The sketchbooks of some individual artists have become very well known, including those of Leonardo da Vinci and Edgar Degas which have become art objects in their own right, with many pages showing finished studies as well as sketches. The term "sketchbook" refers to a book of blank paper on which an artist can, (or has already) drawn sketches. The book might be purchased bound or might comprise loose leaves of sketches assembled or bound together. The ability to quickly record impressions through sketching has found varied purposes in today's culture. Courtroom sketches record scenes and individuals in law courts. Sketches drawn to help authorities find or identify wanted people are called composite sketches. Street artists in popular tourist areas sketch portraits within minutes. Tsaritsyno Park. Moscow. Russia. The estate is known from the late 16th century, when it belonged to Tsaritsa Irina, sister of Tsar Boris Godunov. At that time it was called Bogorodskoye. In the 17th century it belonged to the Streshnevs and then to the Galitzines. In 1775, the estate was bought by empress Catherine the Great, who happened to be passing through the area and fell in love with the picturesque beauty of the land. It received its present name, which means Tsaritsas. In 1776-85 architect Vasili Bazhenov built a palace for the Empress there. When the palace was almost complete, the Empress visited Tsaritsyno to inspect it. She declared the rooms to be too cramped and dark, and the palace unlivable. As a result, Catherine ordered the palace to be torn down, and the architect was fired. The remnants of the foundation of Bazhenov's original palace are still visible in the park. In 1786, Matvey Kazakov presented new architectural plans, which were approved by Catherine. Kazakov supervised the construction project until 1796 when the construction was interrupted by Catherine's death. Her successor, Emperor Paul I of Russia showed no interest in the palace and the massive structure remained unfinished and abandoned for more than 200 years, until it was completed and extensively reworked in 2005-07. Currently, in Tsaritsyno there are a history and architecture museum, a landscape park with an adjacent forest, an art museum, the Biryulyovo dendropark, and a cascade of the Tsaritsyno ponds.